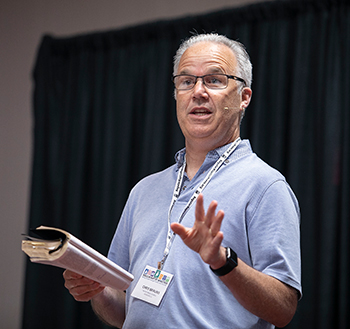 What is forgiveness? Of what does it consist? Is Biblical forgiveness totally unconditional, or does it come with strings attached? These are just a few of the questions Chris Brauns, pastor of the Red Brick Church, Stillman Valley, Ill., addressed in his module, “Unpacking the Forgiveness Debate.”

Brauns, who has written a book on Biblical forgiveness, urged attendees to grapple with the complexities involved in the forgiveness debate. He argued that believers must ground their understanding of forgiveness in a commitment to gospel- and Jesus-centered Christianity. Such a robust, theologically informed view of forgiveness stands in stark contrast to the world’s therapeutic view of forgiveness, which Brauns believes implies universalism, compromises the testimony of the church, and fails to point lost people to the cross.

Brauns concluded by impressing upon attendees the importance of practicing Biblical forgiveness and following the example of Jesus in all things—especially when dealing with those who need forgiveness.

Previous post How the Holiness of God Fuels Our Worship

Churches in the Democratic Republic of the Congo can gather again, reports Bertin Mwema, president of the Community of Evangelical Baptist Churches of ...more

Open Mike: What Does It Mean to Be Forward Thinking?

By Mike Hess I write this article on the eve of the NFL draft. It amazes me how popular this event has become. Consider for a ...more

NEWS FROM REGULAR BAPTIST MINISTRIES Mike Hess, GARBC National Representative Let me ask you a challenging question. Does your church have a culture of mentoring and training ...more