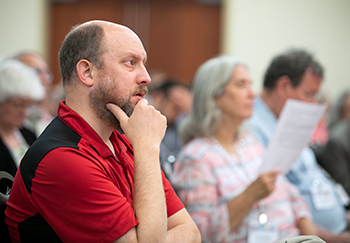 David Strope, Council of Eighteen chairman, called to order the 2019 business meeting. After a full year of service, Mike Hess began his first annual report as national representative, informing the messengers about what has taken place in the association during 2018–19. “It’s been a year of transitions,” Hess says. “A year ago, we had absolutely no idea what God was going to do at the national conference,” but “it was a great opportunity to trust our sovereign God.” Hess informed the messengers about several initiatives the GARBC will be promoting, including greater attention on church revitalization and pastoral soul care.

Treasurer Mark Johnson updated the messengers on the association’s financial position and highlighted the newly available retirement plan for GARBC pastors and staff through Regular Baptist Ministries. He noted several encouraging areas in the GARBC’s finances, such as increased curriculum sales through RBP’s Strong Curriculum, a second year of record-breaking VBS sales, and the continued growth of Kids4Truth Clubs. This is the third year in a row that the GARBC has ended the year without a deficit, he says.

Motions were approved to bring three new churches into GARBC membership: Fulton (Indiana) Baptist Temple; O’okala (Hawaii) Fellowship; and Soteria West Valley of Goodyear, Ariz. The messengers voted on new candidates for the Council of Eighteen and approved two new resolutions: “The Essence of Worship,” and “Condemnation of Anti-Semitism.”

The Council of Eighteen also presented the messengers with a proposed amendment on human gender for the Articles of Faith and a proposed update to the purpose statement in the association’s Constitution. Per the GARBC bylaws, those items will be voted on at next year’s business meeting.

ORDER YOUR FALL RBP CURRICULUM NOW RBP features an adult Sunday School course every quarter, but you can also choose from more than 35 other elective ...more

The Renew Women’s Conference, an event of the Iowa Association of Regular Baptist Churches, was a time of relaxation and refocusing for the ladies who ...more

In order to have a Biblically clear mind, we need a Biblically developed worldview filter that can sort out the good from the bad, the ...more