The Harmony of Worship 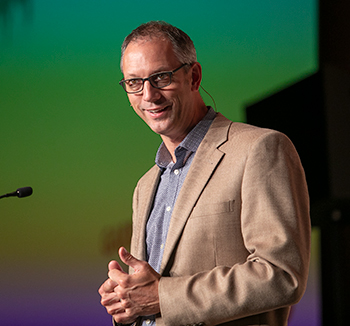 “Last evening, we looked at the purpose of worship,” Mark Vroegop said as he kicked off Thursday morning’s first general session. “This morning, I want to talk about this matter of singing.”

Corporate singing is, of course, the most controversial element of Christian worship. For many decades the “worship wars” have waged, leaving in their wake a great deal of animosity and division. And that’s not a recent development, Vroegop says. From the era of the Reformation to today, disagreements over corporate worship have plagued the church. “John Calvin banned the organ,” Vroegop rehearses. “Some Reformers banned all instruments. Congregational singing, when it first evolved, was incredibly controversial. Anglicans mandated the Book of Common Prayer. John Bunyan went to prison because he didn’t want to use the book of prayer! The Wesleys wrote controversial hymns. The Puritans banned stained glass—and Christmas!”

With so much controversy and dissatisfaction swirling around the subject of music in corporate worship, some might prefer to simply check out of the conversation altogether. After all, why bother expending energy thinking through this issue when the divisions are so deep and rapprochement seems all but impossible? But that would probably be misguided, for Scripture not only commands the church to sing praise to God, it also has a great deal to say about the manner in which we are to sing. The text for Vroegop’s sermon is Colossians 3:11–17, which enjoins the church to “let the peace of God rule in your hearts, to which also you were called in one body; and be thankful. Let the word of Christ dwell in you richly in all wisdom, teaching and admonishing one another in psalms and hymns and spiritual songs, singing with grace in your hearts to the Lord” (vv. 15–16).

Vroegop notes that, according to this passage, one of the things that must mark believers is unity in the midst of diversity. “Paul is saying there’s supposed to be something that’s unique about the church that the world looks at and says, ‘How in the world does that work?’” We should be so marked by unity and harmony that our common identity in Christ cuts through all other lines of division and demarcation.

Why do churches so often fail to live up to this standard of unity and harmony when it comes to corporate worship through singing? Vroegop suggests it may be because we allow our pridefulness to get in the way. “It’s what a friend of mine calls the ‘pride divide,’” Vroegop explains. “On the one hand you have people in the church who feel like they’re not listened to, they’re not considered, and they’re forced to deal with things they dislike, disagree with, or even hate. Then on the other hand, you have people in the church who feel judged, whose motives are questioned, and who feel like they’re never given the benefit of the doubt. And when that happens, pride—not love—gets to rule. And we divide as people retreat into their corners as the resistors and the resenters.”

What is called for in an environment such as this is repentance. Repentance for our pridefulness and self-satisfaction. Repentance for cherishing our own preferences and convictions over the needs and wellbeing of others. Repentance for failing to take the injunctions of passages like Colossians 3:11–17 as seriously as we should.

In conclusion, Vroegop highlighted four practical implications that flow from this text and discussion:

In Myanmar, missionaries are helping the Uppu people learn how to read and ...more

Prepare Children to Carry on the Faith

If the church fails to teach both what we believe and why we believe it, our children will look for answers in other places. As ...more

Virginia Richardson, a pastor's wife, died May 9. She was ...more

A Perfect Time for Your Church to Grow

By Bob Cowman I tend to see opportunity at the strangest times and in the weirdest ways. If you read the news or follow the commentators, ...more