A Test of Life and Love 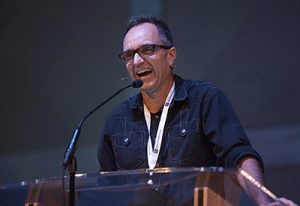 “Nothing can prepare a dad to see his son suffer,” said Pastor Scott Poling as he opened Wednesday’s second general session. Poling, senior pastor of Harvest New Beginnings, Oswego, Illinois, went on to recount the heartbreaking experience of watching his son suffer a seizure. It was a graphic reminder of life’s seemingly ever-present sharp edges, which God in His providence uses to test His children.

Preaching from Genesis 22, Poling discussed the tests of life and love that God allows us to go through. “It’s so easy to say ‘yes, of course, we love You, God,’” said Poling. “But just because we’ve dedicated our lives to the Lord doesn’t mean we always trust Him. We like life to be comfortable and in control.”

Poling concluded by reminding that, two thousand years ago, another Father and Son took a walk together—not to Mount Moriah, but to Mount Calvary. “This Son, the rightful heir—also a son of promise, like Isaac—would have descendants like the sand and stars. Not born through Him, but born again by Him. It’s who I am; it’s who you are.”