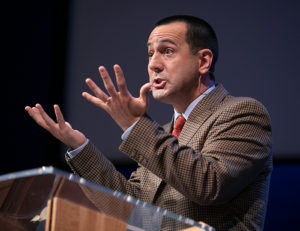 John Jasper (1812–1901) lived in fascinating and historic times. Born into slavery before the Civil War, Jasper became a Christian in 1839 and, later, an influential Baptist minister. According to Michael Wilburn, pastor of Immanuel Baptist Church of Richmond, Va., Jasper’s life in general and one episode in particular poignantly illustrate the gospel’s capacity to produce ethnic unity in the Body of Christ.

It occurred just after John Jasper’s conversion. Jasper was so overcome with emotion that he spontaneously shouted out loud his love for Jesus. One problem: he was in a tobacco factory at the time, and he was on the job. His white overseer overheard the shout and reprimanded him. The white foreman overheard it, too, and asked Jasper to step into his office. There, Wilburn recounted, the foreman “looked Jasper in the eye. And he took his white hand and he put Jasper’s black hand in it, and he said with a soft voice, ‘John, I believe that way, myself. I love the Savior that you just found. Your Savior is mine, and we are brothers in the Lord.’”

This, Wilburn says, is a beautiful illustration of how the gospel can break down ethnic, national, and social barriers and create true and abiding unity. It’s a principle that Paul expounded on in Ephesians 2:11–22. Jewish-Gentile relations in the first century were almost uniformly characterized by enmity, hostility, and suspicion. Yet within the churches of Jesus Christ, true unity between formerly estranged ethnic groups was able to emerge because of the reconciliation effected by Christ’s work on the cross. “The gospel reconciles man to God,” Wilburn explained, “but it also reconciles man to man. It creates unity in Christ, but it also creates diversity around Christ.”

Wilburn suggests that churches today need to reflect this same gospel-rooted ethnic unity. This can happen when we begin cherishing and celebrating gospel-rich stories of redemption (Eph. 2:11–13), Savior-created works of reconciliation (2:14–17), and Spirit-formed communities of saints (2:18–22).

“Let’s return to our churches and our ministries striving to see Ephesians 2 on Sunday morning,” Wilburn concluded. “And let’s pray for it. Let’s pray for all the saints [to be] one body, fellow citizens, and members of the household of God.”