Signs & Wonders and the Church 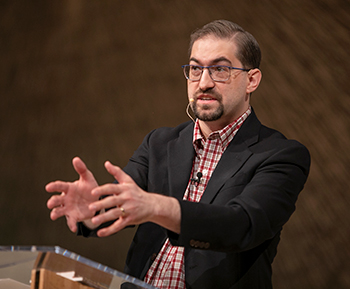 “Cessationism doesn’t teach that miracles have ceased. We still believe our God is a miracle-working God and that, if He chooses, He can work a miracle anytime He wishes to do so,” David Gunn said in his Tuesday workshop, “Signs & Wonders and the Church.” Gunn serves as director of Regular Baptist Press and managing editor of the Baptist Bulletin. “What cessationism teaches,” he continued, “is that some of the spiritual gifts mentioned in the New Testament—specifically the sign and revelatory gifts—have ceased. This is because they were intended to function only during the Apostolic Era, so they have since ceased to be operative.”

Cessationism is the converse of continuationism, the view that all the spiritual gifts mentioned in the New Testament do and/or should continue to be operative today. The GARBC has always been (and continues to be) a cessationist association. But Gunn believes cessationism is quickly falling out of vogue in North American Christianity. He cites New Calvinism and the New Apostolic Reformation as two particularly influential continuationist movements that have greatly increased the popularity of the continuationist perspective or even motivated some previously cessationist churches and ministry groups to move to a less dogmatic “open-but-cautious” viewpoint.

Sometimes, Gunn argues, cessationists have undercut their own position by either defining it carelessly or by relying on overly simplistic arguments to sustain it. “It isn’t enough for us to simply gesture toward 1 Corinthians 13:8–10 with a passing comment about the grammatical gender of the word teleion and then call it a day, as if that settles the issue. That doesn’t settle anything.” This approach, sometimes referred to as prooftexting, does not have enough substance or persuasiveness to be decisive, Gunn argues.

Instead, Gunn suggests, we need to adopt a multipronged approach to establishing cessationism. His preferred approach begins with three lines of argumentation. First, Gunn notes that through Biblical history, spectacular miracles and special revelation have been extraordinary and infrequent. This implies that we shouldn’t necessarily expect such phenomena to be commonplace today. Second, there is good historical evidence that the sign and revelatory gifts did in fact cease shortly after the close of the Apostolic Era. And third, empirically, the modern charismatic phenomena do not align with the New Testament depictions of the sign and revelatory gifts.

Once these arguments have been advanced, Gunn suggests, the cessationist approach to specific New Testament passages will seem much more plausible. “Now we’re in a better position to look at passages like 1 Corinthians 13:8­–10 and Hebrews 2:3–4, alongside other passages such as 2 Corinthians 12:12 and Ephesians 2:19–21, and show how they support a cessationist view of the sign and revelatory gifts,” he says.

Gunn concluded by asserting that cessationism shouldn’t be thought of as a negative doctrine, as if the church has lost something precious with the cessation of certain spiritual gifts; rather, it should be thought of positively. “We don’t need signs and wonders and extra-Biblical revelation, because in His Word and in the normal functions and ministries of the church, God has given us everything we need for life and godliness,” Gunn says. “In the final analysis, this isn’t just a discussion about spiritual gifts; it’s a discussion about the authority and sufficiency of Scripture.”

For further information about the cessation of sign and revelatory gifts, be sure to check out Robert Lightner’s Speaking in Tongues and Divine Healing and Earnest Pickering’s Charismatic Confusion, published by Regular Baptist Press.