“Some have called this the fifth gospel,” Daniel Davey said on Thursday morning of the GARBC Conference, referring to the book of Isaiah. 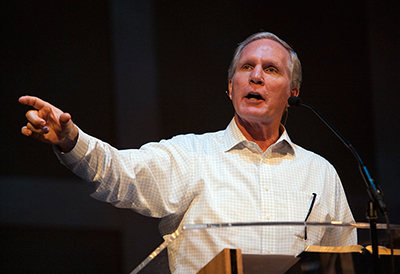 “Some have called this the fifth gospel,” Daniel Davey said on Thursday morning of the GARBC Conference, referring to the book of Isaiah. His sermon text for the first session of the day was Isaiah 52:13–53:12, one of the most poignant prophecies of Christ’s death in the entire Old Testament. Here we learn that the victorious, Spirit-anointed, miracle-working, sickness-healing Servant of the Lord first introduced in Isaiah 42, must first suffer before He can save. “The path is very difficult,” Davy explained. “He is Lord, He is sovereign, He is king. But the path is going to be bloody.”

Isaiah sets forth the substitutionary nature of the Servant’s sacrificial death in no uncertain terms: “But He was wounded for our transgressions, He was bruised for our iniquities; the chastisement for our peace was upon Him, and by His stripes we are healed” (Isa. 53:5).

“Every one of us, without exception, have gone astray,” Davey said. “And the transaction upon the cross is incredible. The cross was a divine, judicial action. Man had no idea what was taking place: ‘Crucify Him,’ they said! But in Acts 2, we see that it was the preordained plan of God, so that the Lamb would go to the cross. Jesus rises from the dead, and gives infinite value to His death. And as long as the Lamb lives, we have an advocate. We have a Savior.”