In the days of Isaiah, Judah was a kingdom in decline. “If only Israel could have a king that would exude all of David’s good traits and none of his bad ones," Daniel Davey mused in his sermon on Wednesday evening. 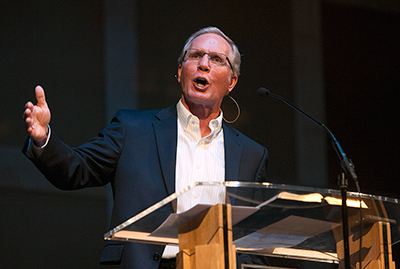 In the days of Isaiah, Judah was a kingdom in decline. After multiple generations of unfaithfulness to God and His covenant, the cultural and religious decay had seeped deep into the fabric of Jewish society. This deplorable state of affairs is reflected in the first chapter of Isaiah’s prophecy: “Alas, sinful nation, a people laden with iniquity, a brood of evildoers, children who are corrupters! They have forsaken the Lord, they have provoked to anger the Holy One of Israel, they have turned away backward” (Isa 1:4).

In his sermon on Wednesday evening of the GARBC Conference, Dr. Daniel Davey, president of Virginia Beach Theological Seminary, contemplated the sorry state of the Jewish nation in the eighth century BC: “Crisis after crisis after crisis was taking place, and Isaiah is speaking here the words of God to a faithless, disobedient people who are turning away from God and living entirely for themselves.” What Israel needed more than anything else was repentance. And leadership. And a Savior.

In Isaiah 42, the prophet introduced his readers to an enigmatic figure, the Servant of the Lord. This is the one for whom Israel had waited and prayed and hoped. Anointed by the Spirit of God, He would establish justice, enlighten the nations, heal the blind, and deliver the captives.

When Jesus arrived on earth 2,000 years ago, He lived out the characteristics of Isaiah’s first Servant Poem, down to the last letter. And when we come face-to-face with the righteous Servant of the Lord, Davey explained, we can do only one thing: “We fall at His feet and we worship Him. And we stand on our feet and we sing to Him. And then we go and we serve Him, with all of our heart, all of our mind, and all of our strength.”