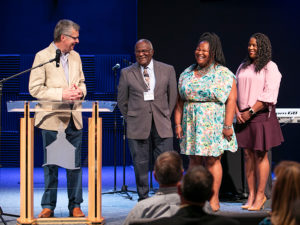 During the Wednesday evening service, the association honored Webster Frowner, a longtime pastor in the GARBC and currently the representative for the Mid-Continent Association of Regular Baptist Churches. John Greening honored Webster for his many years of pastoring Regular Baptist churches and his faithful attendance at GARBC conferences over the years. Many conference attendees also remember his wife Beverly, who went to be with the Lord in 2014. They rarely missed a conference.

John Greening concluded his tribute to Webster by saying, “Brother Webster, we honor you tonight for your faithful service as a pastor, your commitment to God’s Word, and your loyalty to the GARBC. You epitomize what being a Regular Baptist is all about. The best way I know to describe you is to use the words the apostle Paul used when he commended one of his colleagues. Webster, you are ‘my brother, my fellow worker, and my fellow soldier.’ God bless you, brother Webster.”

Webster’s daughters, Crystal and LaSandra, accompanied him to the conference this year and stood with him as he received his commendation from the association.

Previous post The Mystery and Glory of the Church