Worship as Giving Yourself to God 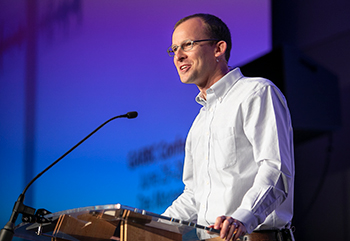 Wednesday morning opened with a message from Ross Shannon, senior pastor of First Baptist Church in Lapeer, Michigan. Continuing to develop the theme “Essence of Worship,” Shannon spoke from Romans 12:1–2. “We all live out of what we believe,” he says. “You might believe that though you deserve Hell, God sent His Son that you might be rescued and given eternal life. Therefore, you trust in Jesus and give your life to Him.” He continues, “If we really believe that God has shown sinners like us mercy, mercy, mercy, we will not simply believe in Jesus, we will give our lives to Jesus.”

Since the prominent attitude in modern churches does not match the New Testament’s description of worship, he began by emphasizing that worship is not to be done simply as a Sunday morning exercise. Instead, worship should encompass the entirety of a person’s life. In demonstrating the necessity of whole-life worship, Shannon identified five points from Romans 12:1–2 that instruct believers in how to truly worship the Lord with every part of their being.

First, he noted that believers are called to worship. As the apostle Paul began his statements in Romans 12, he constructed his subsequent exhortations upon the reality that God’s mercies are manifold; a truth he had presented in chapters 1 through 11. By working back through the first eleven chapters of Romans, Shannon gave verbal snapshots of each chapter, demonstrating how each one reveals the mercies of God. Because of the overwhelming message of God’s mercy in Romans, Shannon confidently declared, “Our sins, they are many; His mercies are more.” Filling in another important piece of the conference definition of worship offered by Mike Hess the night before, Shannon said, “As Christians, we get to view our lives, the whole of our lives, as a response to Who He is—He is mercy—and to What He has done—He has shown me mercy.”

Next, Shannon encouraged attendees to give themselves to God as the only rational response to God’s merciful character. “This does not happen automatically at salvation,” he pointed out, “this is not something that Christians will obey accidentally.” Too often sacrifice is seen as an inseparable function of salvation; so he urged that instead of passively waiting for one’s life to become a sacrifice offered to God, offering oneself to God must be a deliberate action. On the other hand, Shannon confronted the problem of practical unrighteousness which leaves believers to question how their lives could ever be offered acceptably. The solution from Scripture, says Shannon, is that while man can never present his life to God in a pleasing way by himself, in Christ Jesus—and only in Him—believers are able to offer their lives in a truly pleasing way.

After this, Shannon exhorted his audience to think about their thoughts. He used the illustration of a walking path to picture the patterns of people’s thinking: just as a “well-worn path” is easier for repeated travel, so too are the paths of familiar thinking. He explained that the problem with these familiar paths of thinking is that man’s thinking is pragmatic and sinful. “The reason why we don’t see where we are,” he noted, “is because we don’t think about our thoughts.” The solution, he says, is for believers to evaluate their thinking, “hike back out,” and “head down new trails.” These new paths should be according to God’s thinking, not man’s, he says.

Finally, he told the audience to “discern what is good.” He noted that while the term discernment is often used to focus only on filtering out error, the other side of discernment is to positively identify that which is good and obey it. With a renewed mind on the proper path of God’s thinking, believers can discern accurately what the will of God truly is.

Next post How the Holiness of God Fuels Our Worship

HILLSBORO, Ind.—Crossroads Fellowship held its annual conference at Twin Lakes Camp and Conference Center. The two-day conference began the evening of Sunday, Sept. 12, with a ...more

Camp Manitoumi hosted a ladies’ retreat with the theme “Light of the ...more