All people are worshipers of one thing or another, according to Mike Augsburger. “God has created all humanity to worship, to stand in wonder of the things we’re passionate about,” he says. And that passion inevitably overflows into worship. For far too many people, the problem isn’t that they’re not worshiping; it’s that they’re worshiping the wrong things. 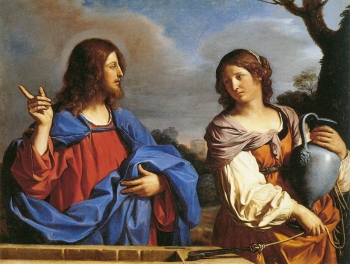 It was with an utter disregard for social conventions that the Galilean rabbi ventured through Samaria. This was something that respectable Jews simply did not do. They took it as a mark of pride and piety not to mingle with the hated Samaritans. No self-respecting Jewish man—let alone a self-proclaimed teacher of the things of God—would purposely take a route directly through the heart of the Samaritans’ territory, much less stop along the way for a lengthy chat with a lone woman (scandalous!), even if that woman’s reputation was spotless.

This woman’s reputation was most certainly not spotless. She was an outcast. A non-entity, socially speaking. One of the dregs of society. And she was hurting.

To Jesus of Nazareth, the social conventions of polite Jewish society were utterly irrelevant. A woman was hurting, and she needed guidance. More to the point, she needed a Savior.

In his Wednesday-morning sermon on John 4, Mike Augsburger, pastor of Soteria Church, Des Moines, Iowa, points to Jesus’ moving interaction with the woman of Samaria as an example of what all Christian worshipers should do and will do when they have made it a priority to worship Christ. “In this text, we are privileged to watch the Son of God reach out to a lost and dying sinner,” he says. In a similar manner, those who are motivated by a passion for Jesus will reach out to lost and dying sinners, because true worshipers lead others to worship Jesus.

All people are worshipers of one thing or another, according to Augsburger. “God has created all humanity to worship, to stand in wonder of the things we’re passionate about,” he says. And that passion inevitably overflows into worship. For far too many people, the problem isn’t that they’re not worshiping; it’s that they’re worshiping the wrong things.

That was, at its root, the Samaritan woman’s problem: she was seeking to find satisfaction in the things of this world. In short, her worship had found the wrong object. And when her false gods failed her (as all false gods invariably do), she desperately needed compassion.

Enter Jesus. He loves her too much to let her remain a victim to her idols and misplaced passions, and so He lovingly yet firmly exposes the objects of her false worship. Augsburger explains, “Essentially, Jesus says to her, ‘Woman, has illicit sex with six partners satisfied the deep thirst in your soul? Or do you feel just as dejected and lonely as before?’”

It is at this point in the narrative, when the woman’s pain and false worship have been thoroughly exposed and she stands before her Maker broken and undone, that the Spirit of God begins to work. As Jesus explains to the woman that He is the promised Messiah (4:26) and that He alone can impart the lasting, living water of life (4:14), the Holy Spirit moves in the woman’s heart, drawing Her affections and redirecting her loyalties toward the Savior. Or, as Augsburger puts it, “The Spirit of God applies the Word of God, giving people new affection for the Son of God.”

The woman’s response to this message of spirit and truth (4:24) is arresting: she immediately drops everything and runs to share the good news about Jesus with the other Samaritans. “The woman then left her waterpot, went her way into the city, and said to the men, ‘Come, see a Man who told me all things that I ever did. Could this be the Christ?’” (4:28–29). So they came. And they saw Jesus. And many believed in Him (4:41).

This is what happens when we “burn white-hot for Jesus by taking time to feed on Him,” Augsburger says. We go out and we share our faith in Him with others, because “we naturally share things that bring us joy!”

“The problem of lack of evangelistic zeal is not a motivation problem,” Augsburger concludes. “It’s a worship problem.” And so the solution isn’t to just try harder or to lay a guilt trip on people for their lack of sufficiently-committed proselytizing; rather, it’s to encourage people to worship Jesus in spirit and in truth (4:23–24). That kind of worship is contagious, and it produces in us a desire not only to know Jesus, but also to make Him known.