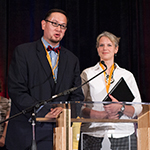 The following churches were voted in to the GARBC fellowship during the business meeting of the 2014 Annual Conference:

Berean Baptist Church in Naples, Fla., says it has one message—the gospel of Christ—and one ministry: to go into all the world to preach the gospel to every creature. This growing church aims to meet the spiritual and physical needs of its congregation, community, and the world. It is a place that encourages people to study the Word of God and to appreciate the wonder of His creation. Pastor Mike Carlson was a youth pastor and assistant pastor until he accepted the call to become pastor of Berean Baptist Church in May 2006.

Cross Community Baptist Church in Queens Village, N.Y., calls itself “a church for all nations.” The church says, “One of the most exciting things about being a Christian is that no matter where we come from, . . . we are all brothers and sisters in the Lord.” Pastor Mike and Sharon Moultrie first walked through the doors of Cross Community Baptist Church as visitors in 1996. They continued attending the church, Mike began teaching adult Sunday School classes within 10 months, and he became pastor in 2009. The church ministers to its community and congregation through events such as clothing drives, midweek Bible studies, and fellowship groups for men and women. Pastor Moultrie says, “We want to be known as people who love God, and as people who love people.”

First Baptist Church in Marshall, Minn., says it is “eager to put God’s glory on display to a watching world.” Pastor Greg Linscott, with his wife, Jennifer, has been leading the congregation since 2008. The church ministers to its members and community through expository preaching, meaningful fellowship, and committed discipleship and evangelism. Two ways the church reaches others for Christ are by holding Bible studies for children, youth, and adults on Wednesday evenings, and teaching English as a Second Language classes to the Karen people in its community.

Good News Baptist Church in Sioux City, Iowa, is developing faithful and fruitful followers of Jesus Christ. Through small groups, support ministries, evangelism, and missions, people are hearing the gospel and growing spiritually. “Disciple-making is the work of the whole church,” says Pastor John Woodford. In a recent effort to make disciples, the church held a Bible study for adults while children and teens attended their own Bible clubs. Whether people had “seriously studied the Bible for years or never cracked the Book open,” they came together to study the Bible’s “ageless answers to life’s hardest questions.” The Iowa Association of Regular Baptist Churches recognized Good News Baptist Church as a Baptist church in March of this year.

Pillar of Faith Baptist Church in Naperville, Ill., has been ministering since 2003. It was formed when families attending Fil-American Baptist Church on the northwest side of Chicago began moving to the southwest suburbs. Pastor Ruel Akut encouraged them to start a church there. He and his wife, Jocelyn, now lead both churches. On Sunday mornings he can be found pastoring Fil-American Baptist in Chicago, and then in the afternoons preaching at Pillar of Faith Baptist in Naperville. Pastor Akut says he is encouraged to see both of his congregations grow in their relationship with the Lord and in their commitment to ministry.

Mosaic Baptist Church in Trenton, N.J., was inspired by the concept of a mosaic when naming the church in 2012. Each member represents a piece of the mosaic, says Lance Walker, founding pastor. He says, “When standing alone, they don’t seem to contribute to the whole. However, when they are grouped together, they form a clear picture of Jesus.” Mosaic Baptist Church is the daughter church of Faith Baptist Church in Trenton. This new church reaches out to its community in unique ways: Bikes of Blessings provides bicycles to people who need them for transportation in the city; Showers of Blessings is a portable trailer that contains two full bathrooms, where about 60 people each week are able to take a shower and receive free toiletries; and Lend a Hand provides clothing for men, women, and children in need.

Resurrection Baptist Church, Woodbury, Minn., is less than a year old, having been organized in November 2013. The congregation meets on Sunday mornings for worship in a local elementary school. On Sunday evenings they meet at the home of their lead pastor and his wife, Steven and Priscilla Gilbertson, for prayer and a “church-centric” Bible study. Pastor Gilbertson says the goal of Resurrection Baptist Church is to grow in a deeper knowledge of and closer relationship with the Savior. “Why would we choose the name ‘Resurrection?’” he asked in a sermon. He answered, “The Resurrection is the capstone of the gospel of Jesus Christ.” Just like a foundation, he says, a capstone keeps a structure from crumbling.